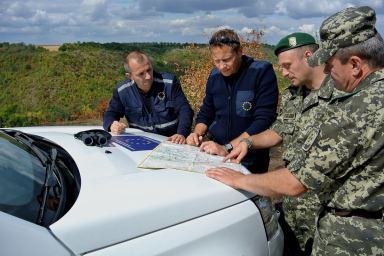 The European Union Border Assistance Mission to Moldova and Ukraine EUBAM  was launched in 2005.  With four-times extension, the Mission has its  Mandate  until 30 November 2017.

EUBAM Operates  to promote border control, customs and trade norms and practices that meet EU standards and serve the needs of its two partner countries.  The Mission is headquartered  in Odesa (Ukraine). It has an EUBAM Office in Moldova and five field offices – two on the Moldovan side of the joint border and three on the Ukrainian side.

• To work with  Moldova and Ukraine  to harmonise border control, and customs and trade standards and procedures with those in EU Member States
• To improve cross-border cooperation between the border guard and customs agencies and other Law-Enforcement bodies; facilitate International cooperation
• To assist Moldova-Ukraine to fulfill the obligations of the Deep and Comprehensive Free Trade Area (DCFTA) they have signed as part of their Association Agreements with the EU
• To contribute to the peaceful settlement of the Transnistrian conflict through confidence building measures and a monitoring presence at the Transnistrian segment of the Moldova-Ukraine border

Ambassador Andrew Tesoriere  from the United Kingdom is the Head of the EU Border Assistance Mission to the Republic of Moldova and Ukraine.

News from EU Border Assistance Mission to Moldova and Ukraine

This illegal and despicable trade earns organised criminals many billions of dollars each year. According to UNODC, such trafficking is conducted most commonly for the purpose of sexual slavery, forced labour or commercial sexual exploitation for the trafficker or others.

One of the key tasks of the Mission has been to assist Moldova and Ukraine to establish Integrated Border Management;  IBM is the cornerstone of the EU’s border security system. A well-implemented IBM helps prevent and combat illegal activities such as THB. The Mission has focused on helping partner services to build the infrastructure, institutional and operational capacity, and legislative base for combatting THB and other cross border crimes.

As part of their Association Agreements with the EU, Moldova and Ukraine must demonstrate they are capable of cooperating with the EU on migration, asylum and border management.   During 2015, the Mission has been carrying out a wide-ranging programme to transfer knowledge to partner services on profiling potential THB victims. EUBAM assisted partners to apply for access to the relevant EU databases, which would help them combat THB (eg on forged travel documents). The Mission worked with Sweden on a project to enhance partners’ operational capacity to fight irregular migration.

Each year EUBAM prepares an annual report on “Irregular Migration and Trafficking in Human Beings at the Moldova-Ukraine Border” with contributions from all the relevant national partners: the Ministry of Internal Affairs of the Republic of Moldova (Border Police Department, Bureau for Migration and Asylum and the Centre for Combating Trafficking in Persons of the General Police Inspectorate), the State Border Guard Service, State Migration Service, the Security Service and the Ministry of Internal Affairs of Ukraine, the Missions of the International Organization for Migration in Moldova and Ukraine, and Frontex.

The Report provides an overview of the national and wider regional context of irregular migration and trafficking in human beings in Moldova and Ukraine, and highlights new trends. The 2015 report noted the improvement of the legislative and institutional base of border and migration management systems in the framework of visa liberalisation efforts in Moldova and Ukraine, and an overall steady trend of irregular migration and THB in those countries as well as an enhanced control of those phenomena.

The European Union External Action Service ‘EEAS’ is a Diplomatic Department of European Union based in Brussels that is responsible for EU’s Foreign and Security Policy.  As of present time–  EEAS  is engaged in 11 Civilian Deployment Missions in various parts of the World.

With the high scope of success, the EU Monitoring Mission in Georgia ‘EUMM is one of them. 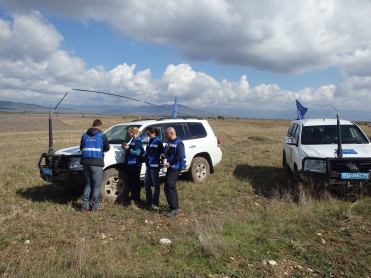 The Mission was launched in  September 2008 following the EU-mediated Six Point Agreement, which ended the August war in Georgia.

The Objectives of the Mission:

The EUMM has about 200 Monitors from various EU Member States , with Patrolling  and Monitoring on the ground.  The Deployment has its Headquarters in Tbilisi and the Field Offices in Gori, Mtskheta and Zugdidi.
The Head of EUMM Mission is Ambassador Kęstutis Jankauskas from Lithuania

A view to European Union Monitoring Mission in Georgia ‘EUMM’