The Forces of Freedom Defenders  with the Oceanic waves……

The United States Naval Forces Europe-Africa Command (NAVEUR-NAVAF) is the component of the U.S European Command  and  the U.S Africa Command.

The NAVEUR – NAVAF  Command have  the responsibilities of  approximately half of the Atlantic Ocean, from the North Pole to Antarctica; as well as the Adriatic, Baltic, Barents, Black, Caspian, Mediterranean and North Seas.  And it covers all of Russia, Europe and nearly the entire continent of Africa encompassing 105 countries with a combined population over one billion and includes a landmass extending more than 14 million square miles.

The United States, historically,  has been always the ultimate hope when all others failed.                      Despite the false media propaganda of  authoritarian systems, the United States with its  enduring philosophical stance for defending Humanity—has immensely been….. the timeless Force of Liberator…..for those afflicted in suffering, imprisonment or chains.

In response to the recent chemical attack by the Syrian regime on its own people including children, President Trump  ordered  Military Strikes on Syrian airfield– sending a strong message that the United States will not stay silent where such an atrocity had been committed.

April 2017 was not the first time that the Syrian government, with the similar pretexts or denial, fired the chemical weapons on its civilians. In the  previous years the regime in Damascus had also carried out such an internationally prohibited means. 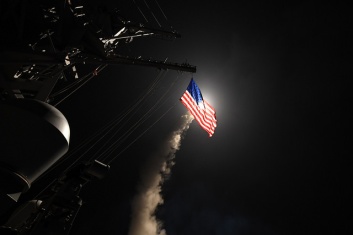 “The use of chemical weapons against innocent people will not be tolerated.”  Stated the U.S Department of Defense April 6, 2017

The United States strike operations were launched on April 6 U.S EDT  (4:40 a.m, April 7, local  time-Syria) on Al Shayrat airfield in Syria– and were endorsed by most countries around the World, all European governments including France, Israel and Germany.

“Tonight, I ordered a targeted military strike on the airfield in Syria from where the chemical attack was launched.  It is in this vital national security interest of the United States to prevent and deter the spread and use of deadly chemical weapons.  There can be no dispute  that Syria used banned chemical weapons, violated its obligations under the Chemical Weapons Convention, and ignored the urging of the U.N. Security Council.”  Statement by President Donald Trump April 6 2017 © The White House Press Secretary office

Minister of Defense, Claus Hjort Frederiksen of Denmark, supports the U.S Military action during the night between Thursday and Friday against an airbase in central Syria. (unofficial translation)

“With this action, the United States has sent a clear and unambiguous signal to the Assad-regime in Damascus that the use of chemical weapons will not be tolerated and will have clear consequences. The Danish government supports the US military action, and I consider the US reaction completely appropriate in light of the heinous and horrifying nature of the chemical weapons attack against civilians in northern Syria a few days ago,”  Stated Minister of Defense, Claus Hjort Frederiksen. April 7, 2017 © Ministry of Defense of Denmark/The Diplomatic Mission of Denmark to U.S.A

Denmark supports the U.S response to the abuses carried out against the Syrian civilian population. (unofficial translation)

“The government supports the U.S reaction to the Assad regime’s gruesome abuses against the Syrian civilian population. I appreciate that the pressure on Assad is now increasing. It must be clear that attacks with chemical weapons against civilians are not acceptable.”  Expressed Foreign Minister Anders Samuelsen. April 7, 2017 © MFA of Denmark/The Diplomatic Mission of Denmark to U.S.A

“We support the United States in that swift action. We hope and pray we will see the end of the use of chemical weapons in Syria.”  Prime Minister of Australia Malcom Turnbull  April 7 2017 © PM Malcolm’s Office

“Canada fully supports the United States‘s  limited and focused action to degrade the Assad regime’s ability to launch chemical weapons attacks against innocent civilians, including many children. President Assad’s use of chemical weapons and the crimes the Syrian regime has committed against its own people cannot be ignored. These gruesome attacks cannot be permitted to continue with impunity.”  Statement by PM of Canada, Justin Trudeau April 7, 2017 © Prime Minister’s office

“This week we were shocked by the horrific images coming out of Syria. Hundreds of innocent men, women and children fell victim to the devastating effects of toxic gas. Many did not survive. The use of toxic gas is a crime against humanity – the worst kind of violence and depravity. The international community cannot take too clear a stand against it. Unfortunately, this week Russia and China blocked a resolution in the UN Security Council against Syria. Once again, efforts to form a united front through international law hit a dead end.   A few hours ago the United States sent a clear message  that, with the use of toxic gas, a line has been crossed. In the current circumstances this is a proportionate response. The Dutch government considers this understandable. It is a warning to Assad that the deployment of chemical weapons is unacceptable.”  Announcement by the government of the Netherlands April 7 2017 © MFA of the Netherlands

“The Latvian Ministry of Foreign Affairs believes that the missile strikes launched by the United States on the Al-Shayrat air base in Syria are an adequate response to prevent a repeated use of chemical weapons against Syria’s civilians. This is a clear signal that the proliferation and use of chemical weapons is not to be tolerated.” Announced the  Ministry of Foreign Affairs of Republic of Latvia, April 7, 2017 © Communications Directorate of the MFA of Latvia

The United States Naval Force in Europe maintains a crucial role in most NATO Maritime Joint-Training…… Maneuver and Exercises — as of recent time in Dynamic Manta in the Mediterranean Sea, the southern coast of Italy.

The exercise accentuates the aims on increasing the interoperability and proficiency in multi-dimensional-facet of the Naval capacities,  Anti-Submarine and Anti-Surface Warfare in NATO member states.  Dynamic Manta was also carried out in 2015 and 2016, with the similar objectives.                                   This time it is hosted by Italy,  led by NATO and being executed from March 13 to 25. 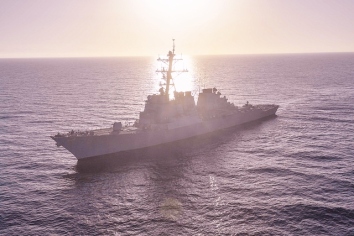 Announced by the U.S Naval Forces in Europe/Africa, the United States has, in addition  to the Naval units, provided:

“Exercise Dynamic Manta is an excellent way for NATO allies to build resilient warfare capabilities, including anti-submarine warfare capabilities, through realistic training and challenging scenarios.  The chance to participate in an exercise that enhances NATO’s overall multi-lateral operations is a tremendous opportunity, and we look forward to working with all of the participating nations.”  Highlighted Commander  Andria Slough, Commanding Officer of the USS Porter (DDG 78) March 14, 2017 ©U.S Naval Forces Europe/Africa

The U.S Naval Forces in Europe-Africa/2

On October 12, the USS Mount Whitney as a part of U.S Naval Forces in Europe/Africa arrived in Batumi  Georgia for a port visit.

Described by the United States Navy,  the USS Mount Whitney’s entry in the Black Sea is a routine port visit in partnership with the NATO Allied member States and partners which aims:

News from U.S Mission to NATO

The United States Military Sealift Command  (MSC)  is a Military Naval Agency to support transportation for the U.S Navy at seas and oceans.   Its history goes back to the second world war– even though at that time the MSC was not established as the independent agency.  A few years later in 1949 the formation of  the Military Sea Transportation Service, as a distinguished agency,  was materialized to provide ocean transportation support for the U.S Department of Defense.

In the years followed the 1949,  the role of Military Sealift Command (MSC), developed and commenced to project itself more significantly.  Its operations continue to insert the vital support,  not only to the United States Navy but also for NATO Allies–encompassing from the Cold War era, the Gulf War, Iraq and Afghanistan missions– and to the most ongoing operations of the present time, inter alia, the  NATO and EU in the counter-piracy.

In the recent years with much synchronized joint efforts of the U.S and European Naval Forces in the various global missions, the MSC also has notably expanded its supporting tasks to the European Naval Forces. In this effort one of its main tasks is for Replenishment At Sea (RAS).  The recent MSC statistic report describes that at the present time there are approximately 110 ships on a daily basis operating on support mission across the globe.

As a crucial partner with NATO, the U.S Naval Forces in Europe-Africa have a central part in establishing and re-enforcing the Maritime Security in European Waters, the Mediterranean Sea….. and all the way  beyond.

Along with other Naval Missions, ranging from Training, Maneuvers, Joint Exercises with its various Naval Global partners–  Patrolling and Monitoring from Coast to Coast for establishing and to maintain the Maritime Security, the  United States Navy  has been simultaneously supporting the European Naval Force in Operation Atalanta.

One of its main Vessel in supporting the Operation Atalanta is the USNS Laramie. 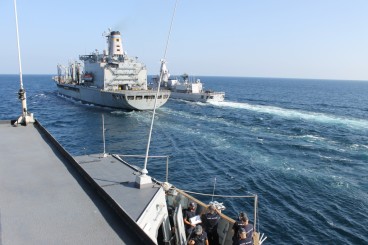 Equipped with Chopper deck, the gigantic U.S Naval ‘Laramie’  is a Military Sealift Command Replenishment oiler of HENRY J. KAISER  Class,  launched in 1995.  Since then the Ship has been, mostly, in a long  journey Missions from the Pacific to the Indian Ocean, from the Mediterranean Sea to the Gulf of Aden, providing a vital support to the U.S and European Naval Forces– as to enumerate from Aircraft and Helicopter Carriers, Frigates, Corvettes,  Combat, Assault, and the Paroling Ships.

As a part of this ongoing Operational Support and the Replenishment at Sea, the USNS Laramie met in a close contact with  the Operation Atalanta’s new Flagship, HNLMS Tromp  of the Royal Netherlands Navy  on August 8th in the Atalanta Operational field, the Gulf of Aden.

Official references of the recent time:

U.S Navy flies in the search operation for Egypt-Air

On May 20, the  U.S. Navy P-3 Orion has launched its Operation in the search for missing Egypt-Air.

“The U.S. Navy is providing a P-3 Orion in support of the Hellenic Armed Forces, and the Joint Rescue Coordination Center in Greece, in response to a request by the U.S. Embassy in Athens, Greece for assistance in the search of the missing Egyptian aircraft.”