Sir, it is a great honor to have you with us in this interview. Thank you very much.

Q: Since 1999 KFOR has been the pillar of security and stability in Kosovo. Could you give us an overall picture of KFOR mission and the crucial role that the U.S Army holds in it.

MAJ. Sam K. Otto, Spokesperson of the Public Affairs: The US along with NATO and Allied partners are leading a peace support operation in Kosovo to build peace and stability in the area. Under the authority of the United Nations Security Council Resolution 1244 KFOR’s mission is to contribute to a safe and secure environment, support the development of a stable, democratic, multi-ethnic and peaceful Kosovo, support and coordinate the international humanitarian effort and civil presence in the region. Regional Command East (RC-E) is the US led team responsible for the KFOR mission in the eastern part of Kosovo. This team includes aviation, medical, and forces capable of monitoring the safety and security of Kosovo citizens along with providing a response if needed.

Q: In the last two decades the United States has been the major contributor in NATO-led KFOR operation. Please enlighten us about the U.S posture in KFOR at the present time, and its achievements in this mission so far.

MAJ. Sam K. Otto, Spokesperson of the Public Affairs: The 2nd Brigade Combat Team, 34th Infantry Division from the Iowa Army National Guard is supporting NATO and operating as the US led multinational Regional Command East headquarters for KFOR. The US team is comprised of Soldiers from the Michigan, Maryland, Delaware and Washington National Guard along with US Army Reserve and Active Duty troops from Fort Hood, Texas. Our priority is to provide a safe and secure environment to build peace and stability in the area and let the people of Kosovo have freedom of movement throughout the region. Every Soldier in KFOR whether it be US, NATO or Allied Forces stand ready if called upon by the institutions of Kosovo as a third responder after the Kosovo Police and EULEX. We have full faith and confidence in the Kosovo Police, which is a fully capable force, in enforcing the rule of law throughout Kosovo. 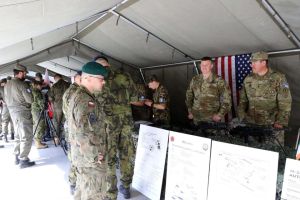 Q: Iowa National Guard has a State Partnership Program with Kosovo. How the significant impacts of this partnership could be described at the military and local levels?

MAJ. Sam K. Otto, Spokesperson of the Public Affairs: The Iowa National Guard and Kosovo are state partners. There are many cities in Kosovo who have sister cities in Iowa. However, under the current mission, the forward deployed Iowa National Guard Soldiers are here to support NATO and contribute to regional security, promote stability, and ensure everyone feels safe and secure in the area. While operating under a NATO headquarters the relationship is limited between the Soldiers deployed in Kosovo with the institutions of Kosovo from a military standpoint. Some of our leadership and Soldiers have been to Kosovo before which helps with knowing the area and they bring a wealth of knowledge and experience that assists in our current mission.

Q: In April 2020 the U.S.-led Kosovo Force Regional-Command East, delivered personal protective equipment to North and South Mitrovica. Could you tell us more about the role of U.S Army in mitigating the Covid-19 pandemic in region?

MAJ. Sam K. Otto, Spokesperson of the Public Affairs: Although the 2nd Brigade Combat Team, 34th Infantry Division arrived in November to Kosovo, KFOR has assisted the institutions of Kosovo to deliver personal protective equipment to some of the local population and health care facilities. Restrictions were placed for the safety of our Soldiers and also for the population to prevent the spread of COVID-19. Masks have been required, gatherings have been limited to essential personnel only, hand sanitizer was been distributed and encouraged to use regularly. RC-East never wavered in our ability or readiness to accomplish our mission of providing a safe and secure environment, but we did have to modify how we conducted meetings and took more precautions to protect our force and the local people we have to interact with. 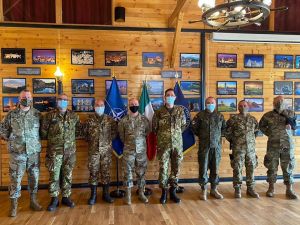 Q: Among many other outstanding tasks that the U.S Army has been performing in KFOR is its Regional Command East Religious Support Team. The KFOR RC-E Religious Support Team  has been not only a special place for the multination partners in KFOR but also a place for promoting the interfaith dialogs in support of peace and stability in Kosovo. Could you please elaborate on this U.S Army-led humanitarian effort.

MAJ. Sam K. Otto, Spokesperson of the Public Affairs: Regional Command East’s Religious Support Team is led by Chaplain (Maj.) Cory Van Sloten who meets regularly with religious leaders throughout RC-East to promote dialog, peace and stability between members of all faith. He is able to bring a vast range of experience and knowledge to the organization which he is able to pass on to religious leaders. Religious freedom, religious dialog, and religious cooperation are some of the necessary themes Chaplain Van Sloten shares.