For the sixth year in a row Denmark is ranked the easiest  place in Europe to do business. Globally, only New Zealand and Singapore are ahead of Denmark in the World Bank’s ‘Ease of Doing Business Index Report’.

“It is important for our ability to attract foreign investments that Denmark is one of the world’s best places to start and run a business. We will take advantage of the excellent ranking to make even more international companies aware of Denmark as an attractive place for doing business. I am also pleased to see that Denmark is the best country in the world to use as a base for International Trade.”  Elaborated Minister for Foreign Affairs, Kristian Jensen on this occasion.

Started on the October 22,  this year’s U.S-European Best Squad Competition was finalized on October 27 with the Armed-Forces of  Norway  in the first place,  Sweden and Belgium  in the second and the third.

The U.S-European Best Squad is the U.S Army Europe sponsored military competition covering over 30 events and 27 challenges in the period of four days.  The Armed Forces from Belgium, Denmark, Italy, Latvia, Lithuania, the Netherlands, Norway, Spain, Sweden, the United Kingdom and the United States  were the participants in 2016 competition.

The Best Squad Competition is designed to project a dynamic presence, foster military partnership and promote NATO and partner nation interoperability. Explained the U.S Army Europe on the importance of this event.

Message of U.S Department of State on the occasion of Austrian National Day October 2016

END_OF_DOCUMENT_TOKEN_TO_BE_REPLACED

One of the important tasks of the European Naval Force in Operation Atalanta is Military outreach during the port visit.

The Spanish  Naval Warship, ESPS Relampago has been part of Operation Atalanta in rotational deployment terms since 2012, when its  chapter in Operation Atalanta started with a successful  Rescue Operation that saved the lives of 68 people in the gulf of Aden.

Denmark the Land of European Innovation and Technology presents the best reasons for Investment in its Territory.

The Great 10 Good Reasons to Invest in Denmark

Exercise Silver Arrow is a two-week Latvian-led exercise starting from October 17.  The participant Armed-Forces are from: Albania, Canada, Estonia, Germany, Latvia, Lithuania, the Netherlands, Romania, UK and the United States.

“The Exercise is to develop relationships and leverage Allied and partner nation capabilities preserving peace through strength. And it is part of  Operation Atlantic Resolve, a U.S. lead effort being conducted in Eastern Europe to demonstrate U.S. commitment to the collective security of NATO and dedication to enduring peace and stability in the region.” Highlighted by the DVIDS October 17, 2016

Despite many false mainstream media’s propaganda, the State of Israel and its Armed-Forces have one of the most open multicultural Political and Military system.  The history of Holyland can attest this fact, by having its 8th President an Iranian immigrant Moshe Katsav,  only a few years ago.

With the encouragement of PM  Benjamin Netanyahu  and religious leaders like Greek Orthodox Priest Father Gabriel Nadaf  more young Arab and Christian are joining the Israeli Armed-Forces, for a better life and future which integrates them fully in the States of Israel as the citizens.

The number of Christians and Arab Serving  in the Israeli Defense Force is increasing every year.

END_OF_DOCUMENT_TOKEN_TO_BE_REPLACED

On October 12, the USS Mount Whitney as a part of U.S Naval Forces in Europe/Africa arrived in Batumi  Georgia for a port visit.

Described by the United States Navy,  the USS Mount Whitney’s entry in the Black Sea is a routine port visit in partnership with the NATO Allied member States and partners which aims: 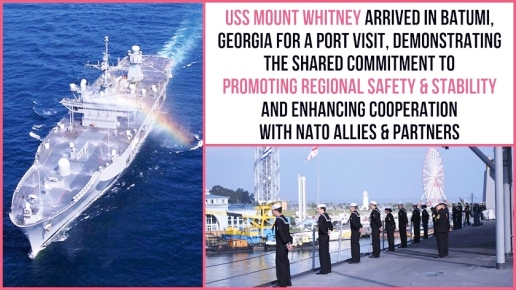 Invest in Denmark and Copenhagen Capacity are helping IBM expand its activities with a new innovation centre in Copenhagen. Within two years, 250 IT professionals will be employed at the new centre. The first talents will join already by the beginning of 2017.

Denmark’s unique position as an innovation lab with access to highly skilled IT talents with a solid business acumen has been the main reason for IBM’s choice of Denmark as the location for its new innovation centre. The centre is expected to bring IBM closer to its Danish clients, making it easier for them to collaborate on creating new innovative digital solutions.  Announce the MFA of Denmark October 5, 2016 © MFA of Denmark