Austria OSCE Chairmanship of 2017  stands on:

The UK re-election to the UN Human Rights Council

Along with the United States, the UK has been champion for promoting  Human Rights in the World with the firm and uncompromising stance.

In October 2016,  the United Kingdom  was re-elected for the UN Human Rights Council for three years term starting January 2017 – December 2019.

“The UK works tirelessly to protect vulnerable people from discrimination and to champion global causes including ending modern slavery and violence against women and girls, and promoting the universal right to freedom of religion or belief.

We will continue to use our voice to help strengthen the Council, to support countries working to improve their human rights record and to hold to account nations that commit serious and systematic violations against their citizens as we did recently leading a strong resolution at a Special Session at the Human Rights Council to address the deplorable situation in Aleppo.” Highlighted the Human Rights Minister Baroness Anelay on the occasion. October 28, 2016 © UK Foreign Office

Earlier this year the United Kingdom has doubled also its funding to support Foreign and Commonwealth Office’s Human Rights and Democracy work around the world.

are the  Concepts of Germany’s Foreign Policy which are promised, by German Government, to be extended firm and actively, to its Seat at the UN Security Council for 2019/2020.

“We want to stand up to face up to our responsibility and help work towards peace and justice,”  Germany’s candidacy for a seat on the UN Security Council for the 2019–2020 term is a “demonstration of our commitment to an organisation that is more important than ever. “We need the United Nations if mediation work for peace and security in this crisis-ridden world is even to remain a possibility.” Elaborated Minister of Foreign Affairs Dr. Steinmeier September 21, 2016 © Federal Foreing Office

“The United States is absolutely committed to the defense of NATO, and that means having full-spectrum capabilities not only within U.S. forces, but with NATO and partner nations as well.” highlighted the U.S Department of Defense in the news-article on December 13,2016.

While Military capabilities are known by the number of the troops and Military personnel –Power and Defense assurance are projected by advanced equipment, technology, the best training that could execute the required strategies, command and tactics in the theater fields.

The U.S Amy Europe and its 7th Army Training Command in Germany, has been the main center to build the NATO members’ Armed-Forces by regular training that to maximize the interoperability;              the multinational exercise,  joint maneuvers, the exchange of ideas and commands — aimed all to fortify the U.S-European Armed-Forces and bolster the NATO members’  Military to the higher capabilities of Physical  and  Cyber Defense.

In early 2016 the United States has announced also the increase of the budget for NATO in the European Reassurance Initiative plan, as a further demonstrations of U.S commitment to safeguard European Freedom, Peace and Security.

Austria assumes the Chairmanship of OSCE 2017

Austria assumed the OSCE Chairmanship of 2017  from Germany at the OSCE Ministerial Council Meeting in Hamburg on December 9th. 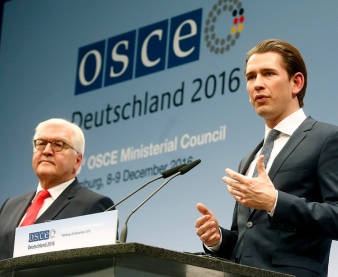 “If we want security, we need to contribute by building bridges between East and West. We look forward to the honour of assuming the Chairmanship and to good cooperation”  Elaborated Foreign Minister Kurz in his speech.

Message of U.S Mission to OSCE to Minister Kurz of Austria:

“Minister Kurz, the United States welcomes you to the Permanent Council, and offers its sincere thanks to Austria for taking on the Chairmanship of the OSCE in 2017.”  July 2016 © US Mission to OSCE

“Australia will bring a principled and pragmatic approach to our term on the Human Rights Council.”  Assured Minister for Foreign Affairs, the Hon Julie Bishop.

“…….On Human Rights Day and during Human Rights Week, we reflect on how far we have come in upholding these universal rights and resolve to continue fighting to safeguard them wherever they are threatened.” December 9, 2016 © The White House Press Secretary.

“All around the world people’s human rights are under threat, so the role of civil society and human rights defenders has never been more important.

A shrinking civil society harms a country’s stability, economic prospects and wider social development. Providing space for civil society to operate is therefore crucial to the spread and strengthening of democracy all around the world.

An active civil society is the hallmark of a mature society; one that is open to challenge and able to protect the rights of its citizens. Governments should not only allow but proactively nurture a healthy civil society. They should commend human rights defenders – not condemn them.

This is the message that we will continue to promote both at home and abroad as we stand up for Human Rights.” December 9, 2016 © UK Foreign Office

Message of U.S Department of State on Human Rights Day

“…..On this International Human Rights Day, we recommit ourselves to upholding universal respect for the fundamental freedoms of all humankind.   Today and every day, the United States will continue to urge all nations to observe the principles of liberty, democracy, free expression, and equal protection under the law without distinction based on race, creed, sexual orientation, political opinion, or faith. As we celebrate the progress we’ve made toward a more just world, we reaffirm our unwavering devotion to a universal value—preserving and protecting the equal and inalienable Human Rights of all people.” December 10, 2016 © DoS

Minister for Foreign Trade and Development Cooperation of the Netherlands, Lilianne Ploumen,

“Human Rights in Cyberspace is a whole new realm of opportunity and risk” December 10, 2016© Dutch MFA

“On 9 December 2016 the Federal Council adopted a report outlining a national action plan for the implementation of the United Nations Guiding Principles on Business and Human Rights. Switzerland is one of the first countries to adopt such a strategy in order to promote coherence between business activities and human rights.”   Bern, Media release, December 9, 2016 © Federal Department of Foreign Affairs

“Australia’s commitment to Human Rights is enduring. We were a founding member of the United Nations and we have been an advocate for its purposes and principles ever since. Our commitment reflects our national values.  This year, Human Rights Day calls for everyone to stand up for someone’s rights today Stand Up For Human Rights. We must continue our commitment to ensuring that all people are entitled to respect, dignity and protection of their rights.” December 10, 2016 © Department of Foreign Affairs and Trade of Australia

Note from Editor in Chief to German readers:  Human Rights has not much to do by  encouraging a large numbers of illegal immigrants  moving towards Europe but to Defend the Academic, Scientists and Political activists when they need protection regardless of their Nationality, Race and Faith.

See more on this  @USEUWAffairs

are based on Denmark’s positions and key priorities on Human Rights.

Denmark has presented its candidature for a seat at the United Nations Human Rights Council for 2019-2021. As a member of the Human Rights Council, we will work for dignity and human rights through dialogue and development. We will work to make a difference for the Council – and for the people around the world whose human rights are threatened.  December 2016 © MFA of Denmark

Additional: Denmark the Leading force in UN for Human Rights,2015

NATO Foreign Ministers meetings, December 6-7 in Brussels, were concluded with the strategic focus on strengthening Transatlantic cooperation and projecting Stability Beyond Borders.

Described by EU High Representative for Foreign Affairs, Federica Mogherini,  EU and NATO start new era of cooperation  in 7 areas with the agreement on 42 proposals.

The areas of focus for more closer cooperation will be on the crucial strategic Defense and Security fields including: Operational Cooperation, Cyber Defense, Maritime Security, Defense Capabilities, Defense Industry/Research, Military Training and Exercise.