The U.S Air Force with France and UK in Atlantic Trident 2021

From May 17-28 next month, the multinational joint training exercise ‘Atlantic Trident 2021’ will be held in France, marking the third military event of the Atlantic Trident. The participants are the U.S Air Force, French Air and Space Force, the Royal Air Force of the United Kingdom– presenting with them, to challenge and test, the most advanced proven fighter aircrafts in a range of air combat scenarios.

The two previous Atlantic Trident 2015 and 2017 were hosted by the U.S Air Force, and in a trilateral joint exercises with the same two major NATO airpower, France and the United Kingdom. 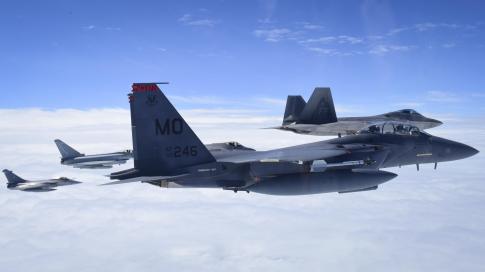 This year the objective of Atlantic Trident will place the focus on re-enhancing the interoperability, to level up the coalition’s operational capabilities, and to transform the readiness in all areas of airpower by applying and improving the fourth and fifth generation of the aircrafts.

By Editor in chief

Dating back to 1993, the National Guard’s State Partnership Program (SPP) started with only 3 Baltic States. The initial objective of the program though was to improve the economic conditions and to give support and facilitate democracy in the Eastern European States devastated under communist law, the SPP developed rapidly and enlarged to a wide range of programs from economic aid to military training and joint exercises, civilian projects and humanitarians assistance.

“Our effort today to broaden and deepen our mutual relations [is] an effort that can make an important contribution to our ultimate goal of a united, free, and peaceful Europe.” elaborated  Secretary of Defense Cheney in his speech at NATO Headquarters in Brussels in April 1992.¹

In the course of almost three decades the National Guard (SPP) evolved, has expanded to 82 partnerships in 6 geographic Combatant Commands with 89 nations across the world. In today’s world not only in Europe but also in diverse parts of the world fostering democracy, stability, peace and building security and defense in many ways have been intertwined and connected to the U.S National Guard State Partnership Program. 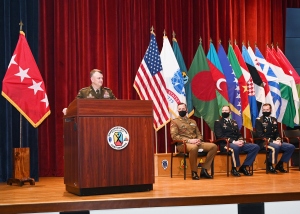 Both State Partnership Programs have been expanding through years. Just in 2019 the MD National Guard finalized successfully 84 projects, military exercises, events and training with its two SPP partner countries, announced by the National Guard.

“It’s all about sharing our experiences as the National Guard and building trust and confidence in the citizens of their country” expressed Army Maj. Gen. James A. Adkins, Maryland’s adjutant general. ©MD National Guard 2013

“Marylanders are always the consistent face when we need advice or assistance,” said at the seminar. “Whenever we have major challenges, we know that we can always count on our Maryland friends.” explained Estonian Ambassador Vseviov at the MD National Guard leaders assembled at the Dundalk Readiness Center Feb. 2020 ©National Guard/ Maj. Kurt Rauschenberg

At the civilian level, Maryland has additionally 10 partner cities with Estonia (Ref. US Embassy Estonia)

With 28,000 multinational military personnel, Defender Europe 21 is the largest multinational U.S Army Europe and Africa-led exercise to augment, enhance and fortify the U.S and NATO allies and partner nations’ interoperability and readiness. This year the exercise started in March, with the participants of U.S Air Force , U.S Navy, over 2000 U.S National Guard, 800 Army Reserve, and will continue through June.

The exercise plan for April:

Acknowledgment: the fact and video courtesy of U.S Army Europe and Africa