In our  exclusive interview series, it is a tremendous honour to hear views from Rear Admiral Gonzalez-Aller Lacalle,  Deputy Operation Commander of European Union Naval Force Somalia, on the diverse aspects of the Operation Atalanta and its continuous success. 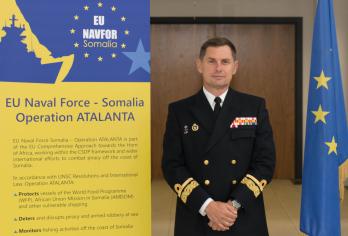 Q: As Deputy Commander for Operation Atalanta, please give us your overview of the Operation in 2016.

Although the last attack on a large merchant vessel was in January 2014 (7 men were found guilty in a Seychelles court in June 2016 of attacking the Marshall Islands-flagged tanker, MV Nave Atropos), pirates and their investors still have the intent and capability and there are still low-level piracy incidents involving dhows. In the coming months, Atalanta will continue to monitor the security situation off the Somali coast, including updates on the capabilities of regional and other forces in the area. We will also continue to work with WFP, shipping industry, counter-piracy partners, international organisations and regional states to assess what type/level of security measures may be required post December 2018 to ensure that piracy does not return to Somali waters.

Q: Could you please elaborate on the Deployed Units, at the present time in the Operation.

Atalanta’s force at sea is currently led by Commodore René Luyckx, Royal Netherlands Navy, onboard his flagship, HNLMS Tromp. At the time of writing, under his command is the French frigate La Fayette, which joined the force at the end of September, as well as the Spanish frigate Santa Maria, of which both crews are highly trained in counter piracy operations. As well as the ships in the area of operations, Commodore Luyckx also has two maritime patrol aircraft and vessel protection teams, all of which contribute to the continued deterrence of piracy and armed at sea.

All contributions to Atalanta are decided by member states in advance of a vessel or aircraft’s deployment, ensuring that there is an uninterrupted presence in the area of operations, with the ability to coordinate and cooperate with other counter piracy partners as well as EU sister missions such as EUCAP Nestor.

Q: Please tell us about what other Maritime Organizations/ Industries are currently working with EU NAVFOR in the Counter-Piracy?

Atalanta is not working alone in the fight against Somali piracy. The shipping industry has played its part by reducing merchant vessels’ vulnerability against pirate attacks, with the implementation of what have proven to be highly effective self-protection measures known as Best Management Practice (BMP).  We regularly engage with shipping industry representatives and update them on the piracy threat assessment.

In the Operational HQ in Northwood, London we operate the Maritime Security Centre Horn of Africa (MSCHOA). Merchant ships’ masters are encouraged to register with MSCHOA and provide us with information about their intended routes, self-protection measures etc as they transit the High Risk Area. This enables Atalanta to monitor the main shipping routes more effectively, and if a ship is attacked, we can respond and send out an alert via satellite broadcast warnings, to warn ships in the area that there has been a piracy incident.

Q: Could you also enlighten us on the subject of the close partnership between EU NAVFOR and the Combined Task Force (CTF) 151.

The close cooperation between EU Naval Force, NATO and Combined Maritime Force (CMF) has been essential to the continued success of counter piracy operations. Essential information is shared and acted upon through the conduct of regular meetings at sea. Additionally, the operational headquarters of all three forces liaise on a weekly basis to ensure the best possible coverage of the Area of Operations through the effective prioritisation of ships and aircraft.

Q:  In the recent years, while maintaining the Operational Power, EU NAVFOR has simultaneously been engaged in the Military Diplomacy by conducting meeting, discussion, and advisory approaches in the Region.  (e.g. in Djibouti, Mogadishu)

Whilst there have been some improvements in the maritime security situation over the past few years, it is recognised that there is still work to be done.  We want seafarers and their vessels to stay safe, and over the coming months we will continue to engage with our regional partners to review the maritime security challenges that the region will face beyond 2016, and how the EU Members States may best respond to these challenges.  Support of the regional states is essential to the continued success of the mission and EU Naval Force is committed to supporting the strengthening and development of their maritime capacities, particularly in Somalia itself, where the Somali Government has expressed its commitment to combat piracy off its coast and Atalanta has helped to train members of the fledging Somali Coast Guard. This is certainly a step in the right direction, but it is widely recognised that there is some way to go before Somalia will be able to police its own coastline.

Q: And lastly but very importantly– please give us a sight to Spanish Maritime Patrol Aircraft Detachment and its crucial role and contributions to EU NAVFOR.

The maritime patrol aircraft is an essential element of Atalanta. They are our eyes in the sky and it is through their diligent intelligence gathering that we can build up ‘patterns of life’, that is ‘what is happening on the ground’ and so learn and understand what the pirates may be doing. This allows us to better gauge the pirates’ intent and capability and so we are better able to effectively deter them from carrying out attacks.