President Trump Reaffirmed the U.S Commitment to the NATO Alliance

NATO Secretary General Jens Stoltenberg traveled to U.S, and met with President Donald Trump on April 12.  During this meeting President Trump reassured NATO of the United States’ unwavering commitment and the continuation of supports 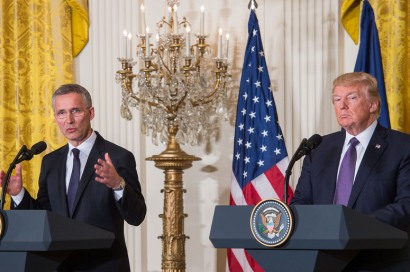 The two leaders also discussed a wide scope of subjects covering: Syria, Iraq, defeating ISIS, other  International security issues, and the up coming NATO summit in its headquarters Brussels in May.

Excerpts from President Trump’s remarks in the joint press conference

“Sixty-eight years ago this month, not far from where we are gathered today, President Harry Truman spoke at the signing of the North Atlantic Treaty. In the nearly seven decades since Harry Truman spoke those words, the NATO alliance has been the bulwark of international peace and security.”

“NATO allies defeated communism and liberated the captive nations of the Cold War. They secured the longest period of unbroken peace that Europe has ever known. This enduring partnership is rooted out of so many different things, but our common security is always number one, and our common devotion to Human dignity and Freedom.”

“It’s my hope that NATO will take on an increased role in supporting our Iraqi partners in their battle against ISIS.”

“Thank you so much, Mr. President. We just had an excellent and very productive meeting. And it’s really an honour to meet you for the first time, here in the White House.

We agree that NATO is a bedrock of security both for Europe and for the United States.  Two World Wars and a Cold War have taught us all that peace in Europe is not only important for Europeans, but is also important for the prosperity and the security of North America.

Over the past months, thousands of US troops have been deploying to Europe. A clear demonstration that America stands with Allies to protect peace and defend our Freedom.”

“Together, we represent half of the world’s economic and military power. No other superpower has ever had such a strategic advantage.”

So Mr. President, thank you once again. I look forward to working with you to keeping the Alliance strong.”  April 12, 2017 © NATO Press Office