Thank you very much Sir, it is a great honor to have you here.

Q: Could you please give us a general picture of the U.S Army’s structure in Europe: its mission, political concepts, aspirations and the long term goals?

U.S. Army Europe Spokesperson: U.S. Army Europe’s mission is to provide ready, combat-credible land forces to, and set the essential conditions for, U.S. European Command and NATO to deter aggression from any potential adversary in the European theater.  There are approximately 38,000 U.S. Army Soldiers, 11,000 Department of the Army civilians and 13,000 local nationals assigned and deployed throughout Europe, strategically positioned across our 51-country area of responsibility to deter aggression and reassure our allies and partners of the U.S. commitment to peace and stability in Europe. 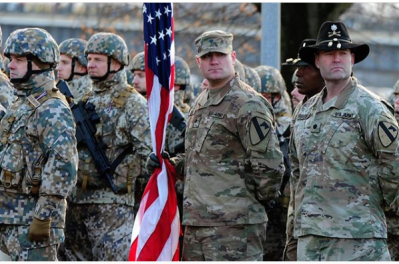 The U.S. Army presence in Europe represents more than 70 years of strong and unremitting commitment to regional stability and collective defense. Our continued presence reassures our allies and partners, and provides the physical and lethal deterrence necessary to counter threats to U.S. interests in Europe while honoring our commitment to NATO.

Q: Every month the U.S Army-Europe organizes and executes various types of training and military exercises in which most European Armed Forces take part.  What can be highlighted as the main objectives for these joint activities?

These exercises are designed to improve readiness and interoperability among participating allied and partner nations. This type of combined training enables allies and partners to respond more effectively to regional crises and meet their own security needs by improving the security of borders, ensuring energy security, and countering threats such as terrorism, illegal trafficking, and weapons proliferation.

Q: In early 2019, soldiers with the 1st Infantry Division’s 1st Armored Brigade Combat Team and 1st Combat Aviation Brigade were deployed to Europe in the Atlantic Resolve mission. Could you please give us a view to this mission and its essentiality in deepening partnerships between U.S Army and the European Armed Forces?

Since April 2014, U.S. Army Europe has led the Department of Defense’s Atlantic Resolve land efforts by bringing units based in the U.S. to Europe for nine months at a time. There are approximately 6,000 Soldiers participating in Atlantic Resolve at any given time.

There are three types of Atlantic Resolve rotations – armored, aviation and logistical (known as a sustainment task force). These rotations are overseen by the Mission Command Element, a regionally aligned headquarters based in Poznan, Poland.

These deployments of ready, combat-credible U.S. forces to Europe in support of Atlantic Resolve is evidence of the strong and unremitting U.S. commitment to NATO and Europe.

Q: NATO KFOR’s Camp Bondsteel is the main base of the United States Army in KOSOVO. Please enlighten us about the Army’s participation in KFOR troops for establishing the long lasting stability in Kosovo.

U.S. Army Europe Spokesperson: The Multi-National Battlegroup-East is a NATO command, with headquarters at Camp Bondsteel which is the main base of the United States Army under Kosovo Force (KFOR) command in Kosovo. KFOR is composed of approximately 4,500 troops from 29 contributing nations supporting the NATO-led peace enforcement mission.

The United States is committed to supporting the peace in Kosovo and the Army has been at the core of KFOR since its deployment in the wake of the allied air campaign in June 1999. Currently, more than 500 U.S. Soldiers sourced from Active, National Guard and Reserve units comprise Multinational Battle Group-East and provide highly mobile, flexible and rapidly deployable company-sized elements to respond to potential trouble spots in Kosovo. As part of NATO and KFOR, U.S. Army units will continue to maintain a safe and secure environment in their respective sectors of Kosovo.

Q: What are the immediate and the long term vision of the U.S Army-Europe to maintain the continuous stability and peace in the continent (Europe)?

U.S. Army Europe Spokesperson: U.S. Army Europe’s mission is to provide ready, combat-credible land forces to, and set the essential conditions for, U.S. European Command and NATO to deter aggression from any potential adversary in the European theater. To accomplish this we have three top lines of effort, build and sustain strong relationships with our allies and partners, setting the theater and building and maintaining readiness. These are accomplished through our approximately 50 multinational exercises, use of rotational forces, such as Atlantic Resolve, Army Prepositioned Stock and more.

The U.S. is unlikely to act alone in any given situation which requires us to promote and develop military interoperability now with our allies and partners. We live, train and fight with allies and partners from strategically positioned bases in Europe for more timely and coordinated response during crises. For more than 70 years, U.S. Army represents unremitting commitment to regional stability and collective defense.

Q: On the extensive basis all European Armed Forces have enduring partnerships with the U.S Army-Europe whether in training, exercises, maneuvers or joint tasks.  How do you see these multinational partnerships and their impact in the operational fronts?

U.S. Army Europe Spokesperson: Our allies and partners are key to the U.S. Army’s overall strength. Engaging with the militaries of other nations gives our Soldiers the opportunity to learn new skills and perspectives.

Q: About 5,630 participants from 15 nations between from the end of March to April 17, 2019 were presented at the 7th Army Training Command and took part in Exercise Allied Spirit. What were the momentous pillars achieved in that military event?

U.S. Army Europe Spokesperson: Allied Spirit X, which took place Mar. 30 – Apr. 17, 2019, is unique in its ability to provide hands-on experience and testing of secure communications between NATO allies and partners to enhance interoperability and readiness across specified warfighting functions. Approximately 5,600 participants from 16 nations took part in this year’s exercise training together under a unified command structure to build readiness and improve interoperability.

The Allied Spirit series expands the capabilities of allied forces in Europe by having a different nation serve as the lead brigade during each rotation. Germany provided the brigade headquarters for this iteration of the exercise, as well as the primary training audience and higher command.

Q: Could you please speak about the crucially of the Enhanced Forward Presence Forces (EFP) and the four Multinational battlegroups with the focus on the US-led battlegroup in Poland?

U.S. Army Europe Spokesperson: NATO has enhanced its presence in the eastern part of the alliance, with four multinational battlegroups in Estonia, Latvia, Lithuania and Poland. These battlegroups, led by the United Kingdom, Canada, Germany and the United States respectively, are multinational, and combat-ready, demonstrating the strength of the transatlantic bond. The eFPs are the most capable allied force NATO has ever positioned on its eastern flank.

The eFP Battlegroup Poland is led by the United States, hosted by Poland and includes troops from Croatia, Romania and the United Kingdom. The U.S. contribution to EFP is a part of the overall deterrence and defense posture and designed to demonstrate that even a limited attack on, or incursion into, NATO allies’ sovereign territory will be met by allied military force.

Q: Please tell us about the key training exercises that were scheduled for summer 2019.

U.S. Army Europe Spokesperson: Most of our summer exercises have concluded, but you can learn more about them at https://www.eur.army.mil/SummerExercises/

* The Interview is subject to Copyright Law.  © The United States Army Europe/ US Europe World Affairs.com.  All Rights reserved.