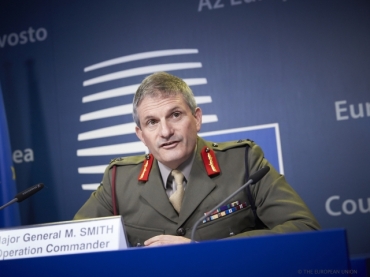 Q: The EU NAVFOR has achieved a resonating success, in its ongoing Operation. Yet the final outcomes requires a longer commitment of the EU Naval Force— that to imply the extension of its Mandate beyond 2016.

Major General Martin Smith: Over the coming months we will continue to work with WFP, Maritime Industry, counter-piracy partners, international organisations and regional states to assess the threat to shipping transiting off Somalia, and what type and level of security measures will be required post 2016 to ensure that piracy does not once again return to those waters. As you can see from a press release from the ‘Council of European Union’ Following a comprehensive review of this engagement, the Council confirms its intention to extend the mandates of the three CSDP  missions and operation until December 2018, with a view to further enhancing the EU’s Comprehensive Approach in Somalia and the Horn of Africa, in particular the security-development nexus. In this regard, the EU reiterates its resolve to implement as soon as possible its initiative for Capacity Building in support of Security and Development (CBSD).’

Major General Martin Smith: At height of piracy in January 2011, 736 hostages & 32 ships were held from ransom.  As I speak to you today, there are still 26 hostages, but no ships are held.  If you look at factors such as intent, capability and opportunity, Operation Atalanta and the other counter-piracy task forces have, through close coordination, successfully deterred and disrupted pirates at sea and significantly reduced their opportunity to attack ships.

The self-protection measures, Best Management Practice (BMP), employed by the Shipping Industry and their use of private armed security teams have also had a significant impact, as they have made it very difficult for the pirates to get on board and take a ship for ransom.

The legal process used by the EU to prosecute suspected pirates has also proven to be a notable deterrent, as pirates know that there could be a high price to pay if they go out to sea to attack ships.

The EU operates a ‘detain and prosecute policy’.  We will always seek, where possible, a legal finish.  Legal handovers are made on the advice of the capturing nation’s Foreign Affairs Department and on the understanding that detainees would receive a fair trial and be treated appropriately.

We assess pirates still have intent and capability, so International Community must remain vigilant.

Q: In your view, how crucial would it be the continuation of EU NAVFOR presence at Sea to enhance and maintain the Maritime Security?

Major General Martin Smith:  Whilst we have achieved significant success in the fight against piracy, conditions in Somalia have not changed sufficiently enough to deter potential pirates or their leaders from once again planning and carrying out attacks at sea.   We see the pirates’ business model as fractured, not broken.

Incidents in 2015, where dhows were captured close to the Somali coast by unknown assailants, and other suspicious activity, demonstrate that there are still armed men (and their investors), who given the opportunity, will seek to profit from nefarious, illegal activity.

Q: With the changeable security environment in the Land and at Sea, would you expect that there would be any additional Tasks, if the Operation ATALANTA gets the extension of its next term Mandate.

The EU Naval Force is mandated to deter and prevent piracy off the coast of Somalia, with the area of operation including the Southern Red Sea, the Gulf of Aden and the Western Indian Ocean. Any decision to change the mandate would have to be taken by all EU Member States in Brussels.

Q: In your assessment, what are the most compelling Military and Political objectives that  Operation ATALANTA  has succeeded to materialise.

Major General Martin Smith: One of the notable successes in the fight against Somali piracy has been the close cooperation between the various counter-piracy forces.

Navies that perhaps would not have traditionally worked together in the past are now regularly coordinating their counter-piracy efforts in the Indian Ocean and Gulf of Aden.

Atalanta warships have, for example, cooperated with the Chinese Navy to ensure the safe transit of World Food Programme vessels along the Somali coast.

Q:  In the course of the ongoing Operation–  EU NAVFOR has established a broader scope of the local and the regional partnerships with the Official as well as the Civilian sectors.

Major General Martin Smith: I see the close cooperation with our national and multi-national military partners, as well as with regional states in the Area of Operations, as being fundamental to our success.

By working closely with our regional partners such as The Seychelles, Mauritius and Tanzania in the security and legal spheres in particular, we have achieved noticeable and significant success in the fight against piracy, with legal transfer agreements with regional states, being worthy of note.

Q: For increasing the readiness and responsiveness of the EU NAV FOR, in its combat against piracy and armed-robbery at Sea:

Major General Martin Smith: The Maritime Security Centre – Horn of Africa (MSCHOA), located within the OHQ Operations Room, is an initiative established by Atalanta with close co-operation from industry. The MSCHOA provides 24-hour monitoring of vessels transiting through the Gulf of Aden, whilst the provision of an interactive website enables the Centre to communicate the latest counter-piracy guidance to the Maritime Industry, and for shipping companies and operators to register their vessels’ movements through the region.

Additionally, the Shipping Industry has made significant efforts to reduce merchant vessels’ vulnerability against pirate attacks with the implementation of what have proven to be highly effective self-protection measures known as Best Management Practice (BMP).

About 75% of the Maritime Industry adheres to self-protection BMP and about 35% of merchant ships have private armed security teams embarked as they transit the High Risk Area (HRA).  These collective measures have helped to ensure that pirate incidents remain at a low level.

Q:  The partnership between EU NAVFOR with the EUCAP Nestor and the EUTM Somalia and  other EU agencies engaged in the region, has been seen immeasurably essential.

Major General Martin Smith: We regularly engage with regional states during port visits, and through cooperation with EU sister missions, EUCAP Nestor and EUTM, have helped to put in place regional training programmes and structures that have contributed to the reduction in Somali piracy. A recent example can be seen that in cooperation with EUCAP Nestor, Atalanta warship FGS Erfurt provided specialist training to Somaliland Coast Guard students.

The training package covered included radio communication, the Automatic Identification System (AIS) used by many modern vessels and how to operate navigational radar. The students will ultimately be manning the brand-new Operations Centre in the harbour town of Berbera and will be required to supervise shipping routes and pass on safety information to vessels transiting through the area. This training is essential in developing skills and capabilities to improve maritime security within the region.

Q: Within the framework of  NATO, the U.S is also engaged in counter-piracy/armed robbery in ‘Operation Ocean Shield’.

Major General Martin Smith: The close cooperation between the ‘big 3’, that is EU Naval Force, NATO and Combined Maritime Force (CMF) is essential in the fight against piracy. We conduct regular meetings at sea to ensure the timely sharing of essential information. Additionally, we conduct weekly meetings at the HQ level to ensure that counter-piracy forces are properly prioritised and so are effectively used. This ensures that the best possible coverage of the Area of Operations is patrolled by the three forces. Finally, we receive support from each others’ assets; for example JDS Suzunami, currently attached to CMF, recently contributed to an intelligence gathering operation conducted by EU Naval Force.