The Bundeswehr in Operation Atalanta-10

The German Navy under Command of Rear Admiral Jan Kaack, with its  Flagship FGS Bayern has completed its Mission in the Counter-Piracy ‘Operation Atalanta’  in the Indian Ocean and the Gulf of Aden.  From this week the Operation will be under the Command of the Royal Netherlands Navy. 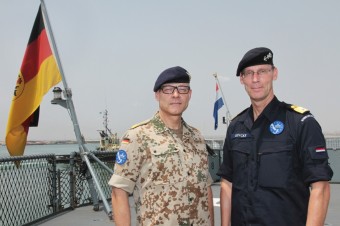 During this Operational period of five months at Sea, among many other striking success of Force Commander Rear Admiral Jan Kaack, it can yet further be highlighted the Rear Admiral’s achievements:

• To form a closer cooperation between the EU NAVFOR and the national local authority in Somalia and the Region
•  To expand the Collective Partnership of European Naval Forces in the Operation and strengthen their Interoperability and Joint Efforts.
•  To increase the cooperation between the EU NAVFOR and other International Partners
• To enlighten further and  increase the awareness of the EU Diplomatic Missions in the Region about the entire aspects of Operation Atalanta, its past success and the importance of its continuation

Special:  Interview with the Force Commander in Operation ATALANTA